History of Genii and Familiar Spirits
By John Beaumont 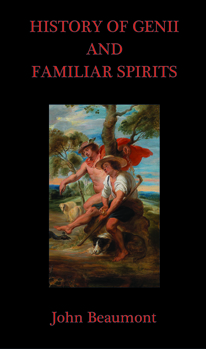 Written in 1705, the book presents a history of the personal genius and familiar spirits, from antiquity to the 18th century, including treatments of the second sight, dreams, and magic. The author draws on the Greco-Roman tradition as well as on foreign examples for cross cultural parallels.

John Beaumont, born c. 1650, died 1731, was a physician and antiquarian who lived in Somerset, in the southwest of England. Through his fossil collecting, as well as papers documenting new mining techniques, Beaumont became a fellow of the Royal Society. However, Beaumont also had a secret, one which he would expose first in his “History of Genii and Familiar Spirits” and later in “Gleanings of Antiquities”.

For years, Beaumont had conversations with entities that he publicly labeled “Genii”, but that in personal communications he labeled “Fairies”. These beings gave him advice and told him about their nature. Beaumont’s communication with these spirits, which he declares happened thousands of times over the course of many years, is what lead to the composition of “History of Genii and Familiar Spirits”, published in 1705. The book was written to vindicate the idea of a personal Genius or Familiar Spirit, who advises and guides an individual in all the vicissitudes of life, as a valid phenomenon, one not caused by mental illness or other physical disorder, and also not the work of evil spirits.

Beaumont was made use of some of the most sophisticated sources of his day for this purpose. He marshaled sources from the Renaissance, classical Greece and Rome, and from the vernacular tradition, using them to great effect, synthesizing them into a coherent whole which is still authoritative today. Many of sources that Beaumont employs are translated into English for the first time by the author, making the work especially valuable.

As personal spirits, the Genii were thought, variously, either to attend the holy or to attend everyone, with the Renaissance writer Agrippa identifying three Genii as ruling different aspects of a person's life. These were given at birth and determined according to astrology. This tradition built on the notion of everyone being assigned a good and evil spirit at birth, an angel on one shoulder and a devil on the other, that competed for a person's attention. In turn, that notion can be traced to the idea in Judaism of the Good and Evil impulses that are given to individuals at birth, who have to choose which to follow. Beaumont examines all these traditions, and many more.

“History of Genii and Familiar Spirits” ranges over a great area. The work is divided up by the method by which the personal Genius and Familiar Spirits are encountered, such as by vision, by sight, by magic, or by dreams. This allows Beaumont to hold forth on subjects that might otherwise be marginal to the subject, such as magic and the nature of dreams. In particular, it allows Beaumont to make a detailed study of the “Second Sight” as it existed in Scotland, the rationale being that the “Second Sight” allowed individuals to perceive Genii and spirits, who would then advise them on matters. It should be noted that Beaumont's treatment of the “Second Sight” preceded the publication of Robert Kirk's “Secret Commonwealth of Elves, Fauns, and Fairies”. This is because though the work was work only circulated in manuscript form, as part of Kirk's papers, until it was published by Walter Scot in the early 19th century. Although religious, Beaumont is notable in this work for objecting to the activities of the witch finders. In fact, Beaumont devotes a substantial portion of chapter four to examining and debunking the story of witchcraft at Salem.