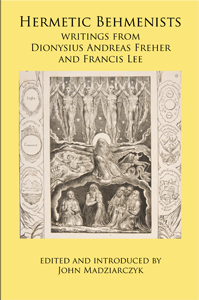 Hermetic Behmenists reproduces writings from Dionysius Andreas Freher and Francis Lee, two exceptional commentators on Jacob Boehme’s philosophy. The texts contained in this book were originally published in 1856, in an edition of 500, given away to friends, and sent to university libraries by their editor, Christopher Walton. They were never sold publicly.

Walton was an English Behmenist and devotee of William Law, and these texts were assembled as part of a research project, “Notes and Materials Towards an Adequate Biography of William Law”, that was never completed. Unfortunately, Walton presented the texts haphazardly, without a table of contents, in microscopic type, with footnotes up to one hundred pages in length, that in turn contained other texts.

Besides Walton’s book, only fragments of Freher’s writings have been published. A great quantity of writings exist in manuscript form. Freher was referred to as “Second to Boehme” in his capacity as a commentator on Boehme’s philosophy, making the inaccessibility of his works an unfortunate loss.

Francis Lee was the co-founder of the Philadelphian Society, an English Behmenist group. Although many of his writings were published posthumously, his Behmenist works were excluded.

This edition aims to put these writings into a more accessible, and readable format.

1. Boehme and the Background of Theosophy 5
2. Rosicrucians and Para-Rosicrucians 23
3. The Philadelphian Society 41
4. Freher, Walton, “Notes and Materials”, Texts in This Volume 56

1. Letter to Dodwell 553
2. [Comments on the Seven Spirits.] 631
3. Introduction to the First Volume of “A Fountain of Gardens” by Jane Lead 633
4. Excerpt from Theosophical Transactions 647
5. Questions to Edward Hooker. About Pordage 663

Organizational Texts and Texts on Contemplation and Prayer: